As you might know, nuclear rectors are also being used in the production chain of isotopes. In the Netherlands, there is currently a plan to build a new research reactor, Pallas, as the successor of the EC-owned High Flux Reactor in Petten. We see there is a strong tie between the community operating a reactor for isotope production, and continuing R&D on nuclear power in general. Also isotope-production with particle accelerators has a few essential advantages, notable less or no long lived waste, no need for fission products and a decentralization of production.
Laka has been conducting a strong campaign against the plans, focusing on new means of irradiating/producing medical isotopes, mostly with accelerators.
The operator of the HFR, ECN/NRG, is also in charge of a cleanup operation for legacy nuclear waste at their site. As they claimed that they couldn't shoulder the financial burden for the legacy waste they threatened with filing a bankrupt which would also stop the production of isotopes. So in October ECN/NRG got a quick €40 million subsidy from the national government, to continue with waste processing and with the irradiation activities for isotope production. 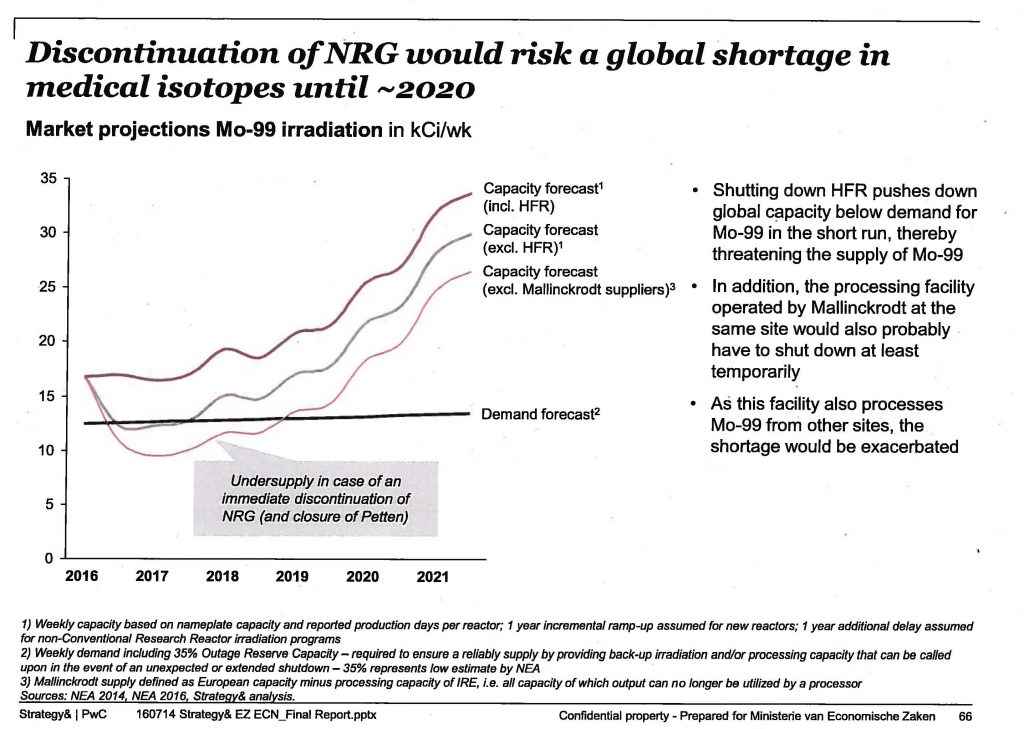 In February, Laka made a transparency request on the documentation of ECN/NRG on which the government decided to grant this subsidy. These documents have now been (partially) released. As the assessment by Strategy&/PWC of the financial forecast for ECN/NRG is in English and also might have implications on other sites where medical isotopes are being produced (notably IRE/BR-2 in Belgium, the Maria reactor in Poland, and also more overseas) it might be interesting. For us the most interesting is of course the documented increased capacity - in the operators own writing! - which is outpacing the slowly increasing demand. This outs the necessity of a new reactor in Petten in a pale light. Read our news item on it at (in Dutch).