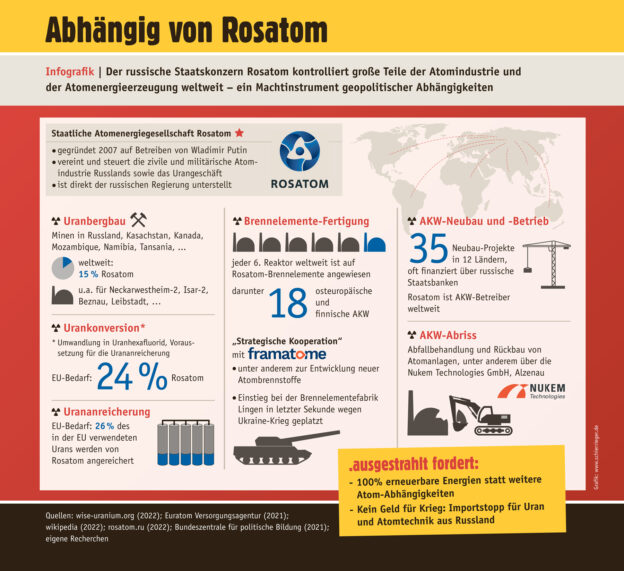 (Nederlandse versie) On Sunday, September 11, the Mikhail Dudin arrives in the port of Rotterdam; a ship carrying Russian uranium. There it will be transferred to trucks that will then transport it across the Netherlands on Monday to Lingen, Germany, where the uranium will be processed into fuel rods. This was announced this morning by the Russian Ecodefense, Bündnis AgieL from Germany and Laka in a joint press release. A few weeks ago, it was already known that a transit license had been issued by the Dutch regulator ANVS for the transport of Russian uranium through the Netherlands. As far as is known, this will be the first transport of Russian uranium in the Netherlands and Germany after the Russian invasion of Ukraine.

Nuclear energy (and therefore enriched uranium) is not covered by the sanctions against Russia. The nuclear energy industry has lobbied hard for this, because Russia is an important player globally. Rosatom, a state-owned company, is building about 35 nuclear power plants worldwide, often financed through the Russian state bank, including in NATO partner Turkey. Russia produces about 12% of the world's uranium, but Rosatom also has uranium mines in Kazakhstan, Canada and Namibia. Russia is the largest uranium enricher. And so on.

In short, nuclear power provides a lot of extra dollars for Russia's war in Ukraine.

Together with Ecodefense Russia, Greenpeace Germany and Laka Amsterdam, the Alliance of Opponents of Nuclear Power in Emsland (AgiEL) demands the immediate stop of the ongoing Russian uranium transport to the Lingen fuel element factory Framatome/ANF. According to the Dutch transit permit, enriched uranium is to be transported from Russia via a Dutch port to the Lingen fuel element factory. According to the Federal Office for Nuclear Waste Management (BASE), which is responsible in Germany, there is also an existing transport permit. Currently, the Mikhail Dudin, known for naval uranium transports, is on its way from St. Petersburg to Rotterdam, where it is scheduled to arrive on September 11. Then it will go by road to Lingen with the forwarding company Dekker (NL).

"Our federal government is supposedly working on energy independence from Russia and preaching tough sanctions - but exactly the opposite is happening: uranium enriched in Russia will be brought to Germany and continues to flush money into Putin's state corporation Rosatom's war chest" said Alexander Vent of Bündnis AgiEL "We demand an immediate stop to the uranium transport and an embargo on nuclear fuel!" As the Federal Environment Minister responsible for the transport permit, Steffi Lemke, must withdraw this immediately - also for the Kiel Canal - and initiate the return of the ship. Federal Minister for Foreign Affairs Annalena Baerbock must, in the opinion of the environmental organizations, put pressure in particular on the nuclear state France to stop further uranium transactions and enforce an embargo and sanctions against Rosatom.

In the view of the environmental initiatives, this shows quite clearly that clinging to nuclear power is just another form of dependence on Russia. "After Russia's invasion of Ukraine, the nuclear energy sector was exempted from international sanctions under pressure from the nuclear lobby, because Russia plays an important role in the international nuclear energy chain," explains Dirk Bannink of Laka in Amsterdam, who tracked down the transport license. So the lifetime extensions with new fuel assemblies, demanded by the FDP and CDU, will almost certainly bring in more revenue for Rosatom. Vladimir Sliviak of the Russian environmental organization Ecodefense and winner of the Alternative Nobel Prize, explains: "Rosatom operates uranium mines worldwide, including in Canada and Namibia. Rosatom is involved in all processing steps such as conversion or enrichment for about 25% of the EU demand."

The environmental organizations demand a consistent implementation of the nuclear phase-out! This includes the decommissioning of the Lingen fuel element factory and the uranium enrichment plant in Gronau. To lend weight to their demands, a broad alliance is preparing a demonstration in Lingen on October 1. It will start at 1 p.m. at the Lingen train station, from where the demonstration will lead to the market square.