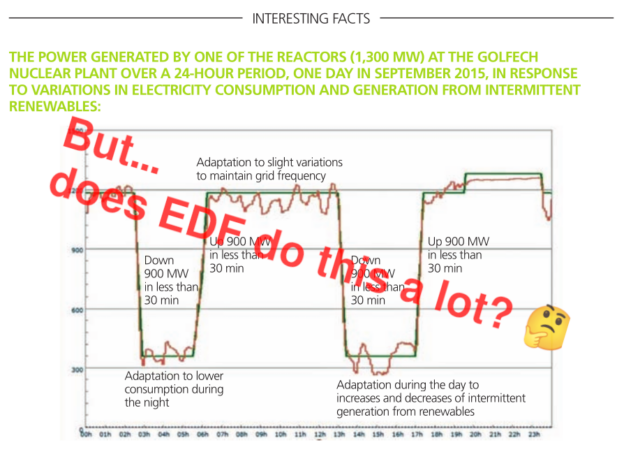 In the words of former VVD backbencher Mark Harbers, now Minister of Infrastructure and Water Management (without nuclear power in his portfolio):

Is nuclear power controllable?
The agreements in the National Climate Deal should lead to 70% of electricity being produced from renewable sources by 2030. Critics will point out that nuclear power stations would therefore no longer fit into the Dutch energy mix. Because of the costs involved, nuclear power stations must operate as base load, and so in their view they are not suitable as a back-up to provide power at peak demand.
The latter is a myth, by the way: nuclear power plants can also be regulated up and down very easily. Otherwise, of course, a country like France would not be able to obtain 70% of its electricity supply from nuclear power plants. But in combination with the other sustainable sources, wind and solar, nuclear can offer the necessary stability so that you can build an optimal energy system for the Netherlands.

A myth?
As is often the case in politics, it's all about the little words here. A nuclear power plant can of course be switched on and off. It just prefers not to do so. The reason being that with power changes in the nuclear reactor, there are also significant temperature and radiation changes. And a nuclear reactor can't stand those too well. Temperature changes and ageing also occur in conventional power plants, but the big difference is: if a gas turbine fails, you can simply repair it. Inside a nuclear power plant, a large part of the installation is highly radioactive, so maintenance is already expensive and complex, and extra maintenance completely unattractive.

Also, for good reason, regulation for a nuclear power plant are more stringent than those for conventional power plants. Where a gas turbine can probably keep on running with a leaky cooling system, with a nuclear power plant this is impossible. So maintenance is more complicated and the tolerance for failure is lower. Two important factors why, for example, nuclear power plants continue to feed electricity into the grid even when the price of electricity is negative: it is better to lose money producing electricity than risking the installation and (even higher) costs by tuning up and down.

So what about France?
Since the 1980s, on a daily basis, surplus French nuclear power has been used to fill large water reservoirs in and around France. When the electricity demand peaks in the evening, the plug is pulled on the reservoirs and the pumps operate in turbine mode. But with the rise of renewable energy, also in France, that system is beginning to wear: At peak times, renewables already supply a quarter of what French nuclear power plants produce with uranium, and the renewable share is increasing every year. That is why EDF has been experimenting with the flexible use of nuclear power plants for years. However, EDF is not very forthcoming with details.

In 2019, the French group reported that their nuclear plants had between 30 and 70 transients per year. Only they didn't tell how large these modulations were. With 58 nuclear reactors, EDF could switch a number of reactors daily day, but in France, in summer around fifty gigawatt is consumed during the day and 35 GW in the night. To make up for that the difference, at least ten nuclear reactors would have to be switched on and off every day. And EDF won't get there with 30-70 transients per reactor per year. And, according to the figures of the French network manager RTE, it doesn't even try: the vast majority of transients per hour are less than 10% of reactor capacity. And you don't replenish peak demand with that. You can see that EDF sacrifices a few nuclear reactors to modulate frequently (including Golfech-1, Paluel-3, Tricastin-3, Cattenom 2&4), but on the whole load, this doesn't have a significant impact.

We also looked at the French power mix of pre-Corona year 2019 to see to what extent the French nuclear power arsenal as a whole follows demand plus renewable generation, and how much (fossil) backup was needed. You then see that nuclear power plants were indeed only switched on and on for a very limited extent: In winter, the daily variation in demand is almost entirely met by (non-nuclear) dispatchable capacity. Once a peak in wind is announced, the nuclear reactors do not switch back enough, and wind energy is evacuated from the grid using export and pumped storage (i.e., negative power).

The same is true for the summer: Online nuclear power plants vary little in their daily power output; the daily demand peaks are met with solar (and wind). Each night, surplus nuclear (and fossil!) electricity is exported. In mid-August, a number of nuclear power plants tune down, which then results in a shortage of power, so in mid-August hydroelectric plants have to step in (the blue peaks). When the nuclear power plants are then tuned back up, there is again too much power for French demand.

What does this mean for the Netherlands?
As the VVD pointed out: The Climate Deal must lead to 70% of electricity being produced from renewable sources by 2030. Even with the current pro nuclear government' plans times three, the Netherlands will not have nuclear capacity similar with France. The Dutch electricity system is, and will remain, very different from the French. So it is remarkable that the VVD uses a reference to France to push for nuclear energy in the Netherlands. But anyway.

So we see that, contrary to what the VVD seems to want to suggest, French nuclear power does not follow demand. Of course, with 58 nuclear reactors you always have a bit of variation, but that is far too little to match the daily demand curve. In the Netherlands, one (Borssele) or three nuclear power plants (current governments dreams) won't be able to do that either. What's more, in France there is a large reliance on dispatchable capacity, including some 4 GW of pumped storage capacity, 16.8 GW of hydropower and -17.8 GW / +8.8 GW of im/export. And this is perhaps the most interesting part of the French power mix: What they use to match demand is not nuclear but seasonal storage (hydro) and daytime storage (pumped hydro).

Because that is exactly what every energy expert says is required for a resilient 100% renewable (Dutch) power mix: Seasonal and daily storage. Only there are no reservoirs here, so for day storage we are thinking of batteries and for seasonal storage - and the mythical Dunkelflaute - hydrogen. In addition to, but so much you know, energy efficiency and industrial demand management.

What about NRG's research?
EDF officials had explained in 2019 that with their sophisticated irradiation strategy, no real problems occurred and that "hot spots" in the fuel are avoided with flexible use (p. 15-16, heading "V.B."). But we see now that this "flexible use" is rather limited. So what is being investigated in the Petten research reactor?

The French energy giant EDF, owner of 58 nuclear reactors in its own country, also sees benefits in making nuclear power production more flexible. This is currently difficult, and this is mainly due to the material from which the tubes are made that house the fuel rods - the nuclear fuel.

Thermal stress
This material, usually graphite, has poor resistance to varying thermal stress in the corrosive environment in which it must do its work. While flexible deployment of nuclear power plants means that there will be a lot of varying temperatures, and therefore thermal stress.
EDF now believes it has developed a new material that can cope well with this new situation and associated thermal stress. What material it is remains unnamed. Even the question of whether the new stuff has a base of graphite remains unanswered.
To get proof that this material can indeed handle varying thermal stress, experiments must be conducted. The High Flux Reactor in Petten has been chosen as the test site, where NRG can also conduct nuclear tests while producing medical isotopes.

Now we can better place NRG's press release. After all, the organisation in Petten has been trying for some time to convince the Dutch government to invest €2 billion in a new nuclear research reactor. So a strategic press release about research into the flexible use of nuclear energy seemed a good idea. At the same time, of course, the likelihood that EDF has discovered a material with which nuclear power plants can be switched on and off without any significant restrictions seems rather small.

Just a quick look at the date of NRG's press release? Ah yes, July 26. "Nuclear reactor operator NRG is going to irradiate  something". In Dutch we call this "Cucumber season".

Analysis of data from RTE

but.. does EDF do this a lot ? 🤔 "THE POWER GENERATED BY ONE OF THE REACTORS (1,300 MW) AT THE GOLFECH NUCLEAR PLANT OVER A 24-HOUR PERIOD, ONE DAY IN SEPTEMBER 2015, IN RESPONSE TO VARIATIONS IN ELECTRICITY CONSUMPTION AND GENERATION FROM INTERMITTENT RENEWABLES" (source)